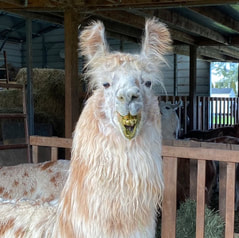 Do Llamas Spit?
The short answer is yes... but will they?
Probably not.
Do they spit at people? 99% of the time the answer to this one is no.

Spitting over food
The most common time you see llamas (or alpacas) spitting is when they are competing over food. For people who are lucky enough to spend a lot of time with llamas this is the most common time they have accidentally been spit on. The llama is telling its herd-mate to back off and the person happened to be in the wrong place at the wrong time. With a bit of awareness and some herd management this is avoidable.
​Herd Maintenance
Some llamas spit during shearing or toe trims (maybe 5% of llamas). Its generally easy to avoid being spit on during these tasks if you have them tied properly.

Pregnancy
Female llamas will spit at male llamas if they are pregnant, again people don't generally get in the way of that process.

A couple of additional thoughts
*If you see a video or meet a llama in real life who spits gratuitously it has likely been mishandled. This is NOT typical llama behavior. Llamas who are over-handled can have a lack of boundaries in this area.
**Llamas DO NOT spit more frequently than alpacas. This is simply untrue.

Does Llama Spit Hurt You?
No, llama spit won't hurt you. Sure, llama spit is unpleasant. It ranges from something that is easily brushed off to something where you'll want to head in and wash your clothes and take a shower. But again it rarely happens between llamas and people.