AMERICAN LLAMA MAGAZINE
GNLC Catman - The record setting sale that almost never happened.
This article is an excerpt from our interview with Steve and Sue Rolfing of Great Northern Ranch, featured in issue one.
Click here to read the full issue 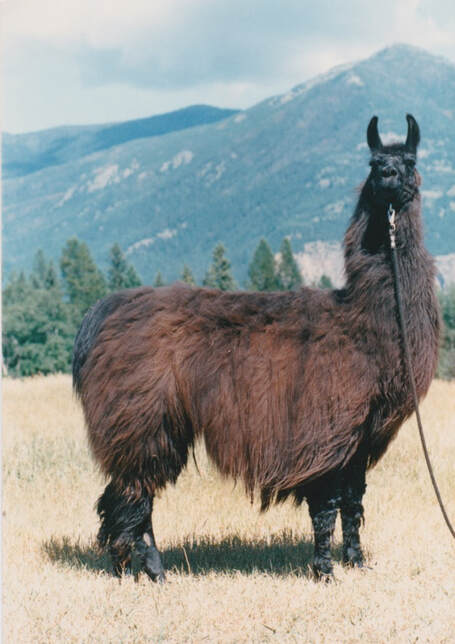 Steve and Sue Rolfing made waves at the first Celebrity Sale, in 1989, by consigning their lead herdsire and one of the most popular studs of the day. GNLC Catman was bred by Patterson and purchased by the Rolfings in 1985 at the side of his dam. Steve recalls that as Catman developed at the Patterson Ranch, prior to being transported, Dick called to say he had second thoughts about letting go of the striking, jet black male, but Steve held him to their agreement.
For Steve to sell Catman in 1989 is akin to him consigning GNLC Hightower to an auction today. Catman was featured heavily in advertising and females were being shipped to Great Northern  Ranch from all over the country for outside breedings. That first Celebrity Sale set auction records for both male and female llamas, and both animals came from Montana. Mirabelle, bred by Taylor Llamas in Bozeman, sold to Iris Christ of Llama Wood Farms. The Rolfings reminisced about Iris boldly standing with her hand in the air, fighting off all bidders until the gavel fell at $170,000. Catman was purchased a few lots later for $175,000 by the Taylors along with four partners in Bozeman. They had all been buying outside breedings to Catman, and didn’t want to see him hauled off to another part of the country.
The sale of Catman was a great moment in llama history – one that almost didn’t happen. As Steve tells it, “The first Celebrity Sale was going to be in October. We consigned Stage Fright, a weanling female that was just gorgeous. I had been offered a lot of money for Catman, like $125,000 but I was cocky and said, ‘No, he’s making us a lot of money for stud service, I’m not going to sell him.’ I was pretty proud of him. He was my guy, you know? Then came a big thunder crash in our pasture early one June morning. I go out there at 7:30 and there’s four dead llamas including the one we were going to sell.” The ground was so saturated by rain that a mother, her newborn baby, and two other llamas, including Stage Fright, were all killed by one lighting strike.
“Tim Vincent had been bugging me to consign Catman and I always said no. Then (the lightning strike) happened. It was like God hitting me with a stick and saying, ‘Steve, you idiot! Sell that llama, take care of your family, put the money in the bank.’ About a week later I called Tim and said, ‘Yeah, I’ll put him in the auction’ and he sold for $175,000. So that was just a clear message that you’ve got to hold everything loosely.” Sue adds, “Don’t hold it too tight, because it's not yours. Ultimately anything can be taken away from you.” 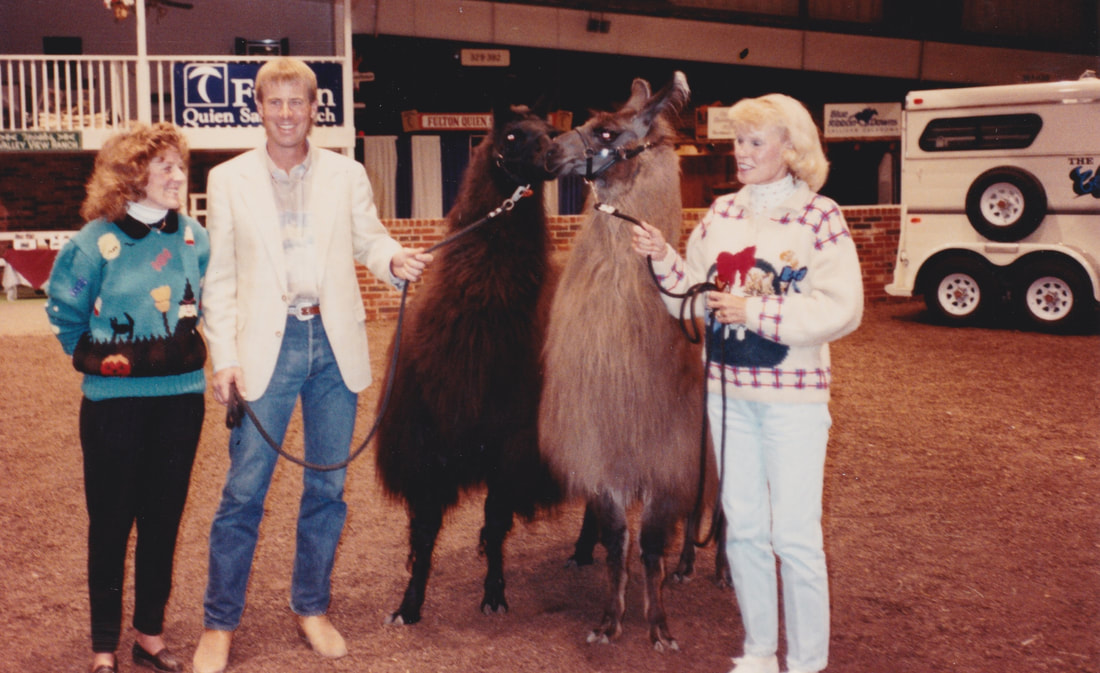 Left to Right: Sue Rolfing, Steve Rolfing, GNLC Catman, Mirabelle, and Iris Christ.
This article is an excerpt from our interview with Steve and Sue Rolfing of Great Northern Ranch, featured in issue one.
Click here to read the full issue